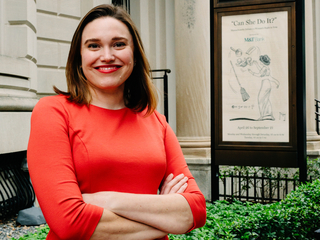 *Please note: We encourage participants to use headphones, if possible, and to mute their microphones. We will utilize the chat function to receive questions. Instructions on how to join a Webex meeting room.
Allison K. Lange, Assistant Professor of History, Wentworth Institute of Technology
For as long as women have battled for equitable political representation in America, those battles have been defined by images—whether illustrations, engravings, photographs, or colorful chromolithograph posters. Some of these pictures have been flattering, many have been condescending, and others downright incendiary. They have drawn upon prevailing cultural ideas of women’s perceived roles and abilities and often have been circulated with pointedly political objectives. In this 100th year of the 19th Amendment, Allison K. Lange explores how suffragists pioneered one of the first extensive visual campaigns in modern American history and how pictures, from early engravings and photographs to colorful posters, proved central to suffragists’ efforts to change expectations for women, fighting back against the accepted norms of their times.
Allison K. Lange is an Assistant Professor of History at the Wentworth Institute of Technology. Lange has worked with the National Women’s History Museum and curated exhibitions for the Boston Public Library’s Leventhal Map Center. In preparation for the 2020 centennial of the Nineteenth Amendment, she is curating exhibitions at the Massachusetts Historical Society and Harvard’s Schlesinger Library. Her writing has appeared in Imprint, The Atlantic, and The Washington Post. Lange’s book, Picturing Political Power: Images in the Women’s Suffrage Movement, will be published in May 2020 by the University of Chicago Press.
Sponsored by the Dresher Center for the Humanities; the History Department; the Visual Arts Department; the Gender, Women’s, + Sexuality Studies Department; and the Women’s Center.
Photo courtesy of the speaker.
[image: A woman in a red dress smiles towards the camera with her arms crossed in front of her. She is standing in front of a building.]
Tags: humanities-forum-spring-2020
0 Comments (requires login)