CURRENTS: Humanities Work Now is lunchtime series that showcases exciting new faculty work in the humanities in a dynamic and inter-disciplinary setting.

By studying an array of media artifacts, Mark R. Villegas sheds light on the prevalence of geek culture in hip hop. Whereas scholars have anchored geekiness to an abjected form of white masculinity, a serious observation of African American geeks yields a much more complex racial terrain. Black geekiness most often routes itself along a storied legacy of African American Orientalism. In revealing the connections among hip hop, geekiness, and Orientalism, Villegas hopes to unsettle the white racial defaults associated with geekiness and, concomitantly, show the expansive (yet unexpected) opportunities for the cultivation of Black masculinity and world making via a largely uncommented upon Orientalism.

“I know the monster; I have lived in its entrails”: Latin American Immigrant Literature in the U.S

In this presentation, Thania Muñoz D. will discuss her current book project, “Canons Without Immigrants: Genre, Memory, and Spanish Language Literature in the United States.” This book explores how in the late 19th century and early 20th century, a group of Latin American intellectuals, politicians, and writers established a dichotomous tradition of admiration or rejection of the U.S. and canonical debates to define Latin American identity. She will focus on two chapters that trace these canons in Latin American immigrant literature to examine the role of Spanish as a literary language that has struggled to find a home in the U.S. and the politics of immigration.

Image description: Side by side photos - a man wearing a brown seater and a gray hat sits outside; a woman with short brown hair is smiling. 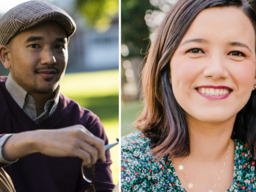