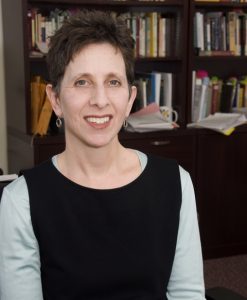 Jessica Berman is Professor of English, Gender, Women’s + Sexuality Studies and Language Literacy and Culture. She served as Chair of the English Department from 2006-2012 and currently directs the Dresher Center for the Humanities at UMBC. Berman is a Principal Investigator of a 5-year project in the Dresher Center, The Inclusion Imperative, made possible by a major grant from the Andrew W. Mellon Foundation, which is designed to advance diversity and inclusion in the humanities at UMBC and the Baltimore-Washington region. She is the Lipitz Professor for the College of Arts, Humanities, and Social Sciences for 2019-2020.

Her teaching and research interests include comparative literature, modernism from a transnational perspective, literature and culture, and feminist and literary theory. She also has a special interest in questions of politics in connection to twentieth- and twenty-first century world literature. Her book, Modernist Commitments: Ethics, Politics and Transnational Modernism (2011), examined the connection between ethics and politics in early twentieth-century writers such as James Joyce, Virginia Woolf, Jean Rhys, Mulk Raj Anand, Cornelia Sorabji, Iqbalunnisa Hussain, Max Aub and Meridel Le Sueur, and argued for an expansive, transnational approach to the definition of literary modernism. Her previous book, Modernist Fiction, Cosmopolitanism and the Politics of Community (2001, paper 2006), explored the connection between community and cosmopolitanism in the writings of Henry James, Marcel Proust, Virginia Woolf, and Gertrude Stein. She is the editor of A Companion to Virginia Woolf (2016) and the reprint edition of the Muslim Indian writer, Iqbalunnisa Hussain’s, novel Purdah and Polygamy (2017). She has published essays in such journals as Modernism/Modernity and Modern Fiction Studies, as well as in such influential volumes as Geomodernisms (Doyle and Winkiel eds) and Disciplining Modernism (Caughie ed.). Berman is currently at work on a book investigating global radio in relation to transnational modernism.